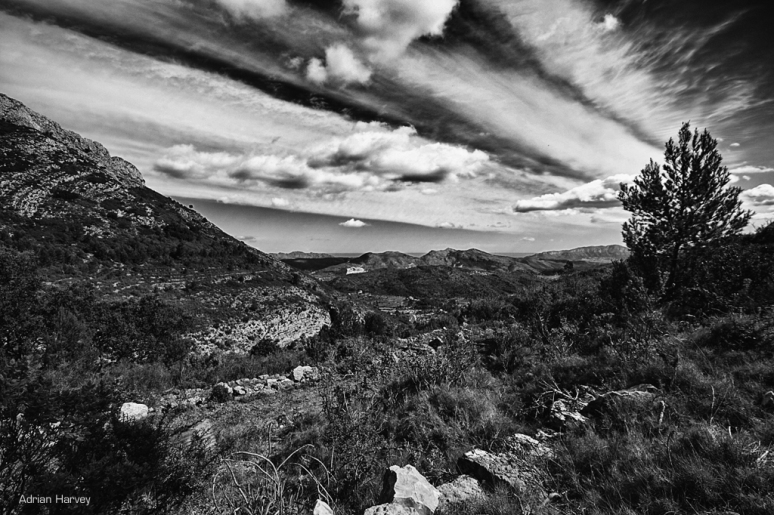 First off, i hope everyone had a great Easter weekend. Ours was great, staying with friends who have some land up in the mountains-it must be 20 years since i roughed it in a tent-marvellous!

There were between 10 and 20 people over the whole weekend-doing what the Spanish do best of all, eating drinking and much merriment, in a beautifully wild environment. I found the light-hearted arguments(of which there were plenty) on how best to make “Fidua,Paella or mountain Puchero” hilarious, Vicente, who was born in France had the gall to try to show me, an Englishman how to bake potatoes in foil in a fire, obviously he´s never heard of “bonfire night”, that peculiar tradition we have in England,of celebrating Guido Fawkes,probably the first Anarchist who´s attempt to blow up the houses of parliament ended in failure, torture and execution, aaah the good ´ol days!

The first day we made an excursion up the Cami Murtas Barranco, our guide for this little trip was my Archaeologist friend, Juande, who assured us it was gentle stroll up the mountain-yeah right! The kids, all of them under 12 years old were having a tough time of it, and me loaded up  with camera equipment, was finding it tough too, even though telling myself it was good for me to get out and get some exercise!

After about an hour of stiff climb we came upon a area, flat, with a beautiful  vista, so picnic time and ½ an hour of respite. I´m taking photo´s and the next minute all the adults are carrying on up to the peak, calling down for me to come up. I´m the only adult among 5 kids on a mountain, so i´m not going anywhere!

My daughter is pretty good when told not to do something, just an explanation is usually all it takes, but when you have a 12 year-old boy as ringleader, throwing rocks down a mountain and encouraging the other´s to do the same, your blood runs cold! I tried explaining that a rock lodged in a fellow walker´s head somewhere below is not going to go down too well but was met with blank expressions, luckily adult authority prevailed-for 5 minutes! Next it´s throwing fireworks around the place-forest fires get you jail time around here, if your at fault and as the only adult it would be me, blood running cold again!

Half an hour later, the parents arrive, exhausted and depleted and i looked to the heavens with gratitude! So it´s back down to “base camp” and a really long siesta in our respective tents before the next round of cooking, eating and dare i say it –drinking (in moderation of course)!

All in all, a great weekend and my Sophie thought that chasing butterflies and picking flowers was much better than the  Wii,Nintendo,Computer or TV, she even agreed that taking a pee round back of tent was infinitely better than taking a pee right in front the tent entrance-even if she did mark the spot with a pile of stones-bless her!